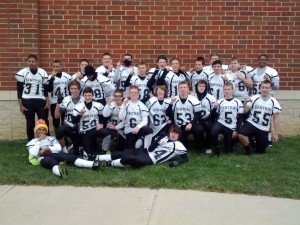 The Warhawk Freshman football team defeated Dublin Jerome on Saturday 28-12.  This win allowed the Warhawks to share a tie with the league championship with Hilliard Darby.  The Warhawks were led out by their captains Ryan Hallinan, Wade Petrides, Ian Dickens, and JD Nickel.  The offense put up points on the board with 4 rushing touchdowns.  Daniel Cellars had two rushing touchdowns and Ryan Clapham and Eli Whitehair each had one rushing touchdown.  The Warhawk defense was led by their two defensive ends Jacob Secrest and Trey Wright who both lead the team in tackles.  The Warhawks ended up their season with a record of 7-2.  Great Season Warhawks!  The freshman football team would like to wish the varsity team good luck in the State Playoffs!  Go Warhawks!