The Westerville Central softball team defeated Olentangy 7-5 yesterday to clinch their 4th straight OCC championship.  With the win the Warhawks moved to 8-0 in league play giving them a 3 game lead over the 2nd place Braves.

Olentangy jumped out to an early lead as Sydney Stepp surrendered a 2-run home in the 1st inning.  The Warhawks battled back to take a 7-2 lead into the 5th inning but the Braves picked up a single run to cut the deficit to four.

Olentangy scored two more runs in the top of the 7th and had two runners on base but Stepp was able to work out of the jam to preserve the victory.

The Warhawks have a non-league game today and will play in the Kelly Lambert Battle for a Cure Classic at Lancaster High School…Central’s opponents will be Marysville and Teays Valley. 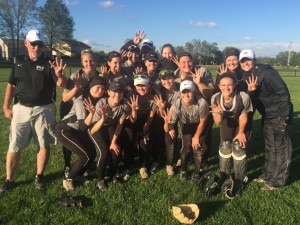