Wednesday’s semi-final win over 3 seed Columbus South sent the Warhawks to  Saturday’s title game versus Delaware Hayes.  Central jumped out to an early lead with senior Tyler Beckel hitting a pair of  3 point shots and a pair of free throws in the 1st quarter.  The Warhawks led 27-15 at halftime.

Delaware would not go away quietly.  The Pacers came out hot in the 3rd quarter hitting 3 point shots on three of its first four possessions.  The Warhawks were outscored in the period 20-8 and the score was tied at 35 after three periods.  Delaware started the 4th quarter with a free throw and took a 36-35 lead.  The Warhawks were able to battle back and regained the lead 38-35 on a 3 point goal by  MJ Davis.  Neither team could sustain a consistent offense and the Warhawks led 41-40 with just under a minute remaining.  On the next possession Central came up empty on the offensive end but then got a stop on the defensive end.  The Pacers fouled Landon Tillman, who with only 29 seconds on the clock, calmly stepped to the line and hit a pair of free throws to give the Warhawks a 43-40 lead.  Delaware missed a pair of 3 point attempts in the frenzied final seconds and the Warhawks secured the win.

Beckel led the way for Central with 15 points.  Tasos Cook and Quincy Clark each chipped in with 10.

The Warhawks advance to the OHSAA Division I Regional Tournament.  The contest versus Thomas Worthington will be played Thursday, March 12 at 7:00 pm at Ohio Dominican University.  Pre-sale tickets will be available in the athletic office beginning Tuesday and are also available online at https://ohsaa.org/tickets….click here to purchase your tickets now. 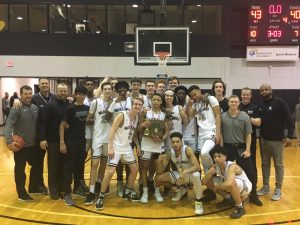